Kamran is a computer programmer by profession, an artist by own imagination and an adventurist by nature. Born and raised in Pakistan, Kamran holds a Ph.D. degree in computer science and now lives in Nuremberg, Germany where he is employed in a software firm. Besides, he is an avid photographer who has displayed his work in few local exhibitions, both solo and collaborative. Sometimes ago, Kamran also used to regularly draw and paint but now enjoys the combination of photography and Photoshop more.

Bicycle touring is Kamran’s one of the biggest passions. He did several bicycle tours in Pakistan. His first tour was as a 13 years old who picked up two friends on a little bicycle and did a round-trip to a nearby town covering 52 kilometers in a day. This tour had an exhilarating effect on Kamran. In the next years, he made solo trips to several cities in Pakistan, often in extreme summar heat with maximum temperature in excess of 45 C°, travelling super-ultralight without any prior training or preparation, and with almost all borrowed gear including the bicycle. His longest trip in Pakistan was in 2002 when he padelled about 400 Kilometers from Multan to Lahore in less than two days. This tour was a bit special for Kamran because few days ago he had quit the teaching job he loved to regain the lost freedom and adventure.

Few months later, something strange happened to Kamran when he was leaving to Germany for further studies. During his PIA flight from Islamabad to Frankfurt, several thousand feet above in the air, Kamran stared out from this window seat and didn’t blink an eye. He was struck by the vastness and the magnificent beauty of nature’s landscape that stretched beneath the plane. Rivers appeared as curved lines, towns as brown patches of rug scattered on the green fields, mountains as wrinkles on the old rough colored paper. Mesmerized by what he saw, Kamran wondered at how it would feel to be on these places? what the local people would be like? the languages they spoke? the culture? the streets and climate? the food and the music, and everything? Sadly, he couldn’t get answer to any of those questions from the plane window. A strong wish arose from the deep of his heart and he closed his eyes.

He had secretly promised to himself that one day he will return and visit all these places on a bicycle and find out the answers of these questions himself.

The seed was sowed and the destiny had been set. Wait of 9 years in the darkness, and lo, here appears the sprout in the form of Kamran On Bike. 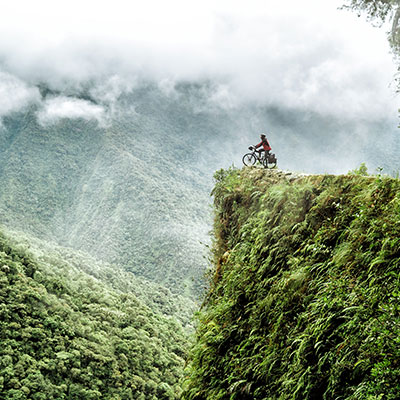