I'm standing at Hamburg airport, just got off a job, waiting for my suitcase. My phone rings. It's Timo from Pelago Bicycles from Finland: "Carlos, we haven't met yet, but I like your photos, do you want to drive the "Japanese Odyssey" for us? "I've never driven more than 190km a day before and certainly not mountains! When does geht´s go?" With my Buddy Philipp, it went short time later into the airplane. We came to Japan with the idea to drive the whole route from Tokyo to Osaka, with a total of 11 checkpoints, 2294 kilometers and 47,400 meters altitude difference.
What we didn't suspect at the start was that among other things 2 typhoons combined with 8.5 days of rain, only existing roads and the sheer endless hospitality of the Japanese were waiting for us. Each of the 1508 kilometers and 30,500 meters of altitude we ultimately drove contributed to the fact that the original idea of the trip was no longer in focus. Instead of "just" seeing the country, we delved deep into the culture and explored the most remote regions of the country. The start in Tokyo was great. All 21 starters met at the Nihonbashi Bridge, which marks kilometre 0 of Japanese roads. It went through the streets and suburbs of Tokyo, for 6 days out into the "Japanese Alps". In the first night the rain began...! The big drops of rain fell relentlessly from the sky and soaking everything that wasn't in their pockets. According to the motto of the Japanese Odyssey: "Be Prepared! The rain gear became our new best friend.

In the southwest of the main island the first typhoon dissolved and let us drive our route for a few days in a light drizzle. The next typhoon greeted us a short time later in Tokushima and accompanied us until shortly before our last kilometres. We were at dawn on an unpaved road, about 45km away from the next town, when I demolished my rear derailleur. Driving on became impossible! Only the "Trail Magic", which was often quoted during bike packing, saved us a cold, wet night in nowhere. An older couple literally ran to our feet. After initial skepticism of the two tired, exhausted and unpleasant smelling bikers towards each other, they started to make phone calls. We landed at Makoto, a 25-year-old very helpful inhabitant of the next village. We got food, a room and the next day we were driven to the next big city, Uwajima. That night we decided to end our journey here and now.

We were more deeply immersed in Japanese culture than we had dreamed. From Uwajima we went to Osaka, the final checkpoint of the Japanese Odyssey, where we met the other starters and celebrated together. The night became long... 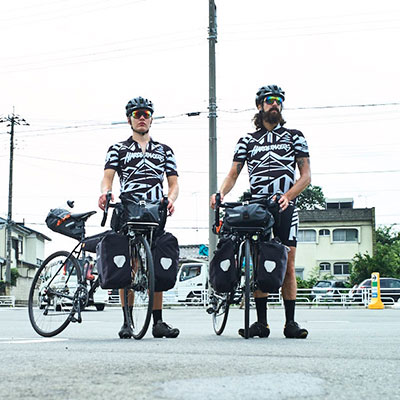